Cytospora canker, caused by the fungus Cytospora kunzei (also known as Valsa kunzei var. piceae), is the most prevalent and destructive fungal disease of Norway and Colorado blue spruce. Occasionally, Cytospora canker is found on Douglas-fir, hemlock, and larch. Susceptibility varies widely among species, but generally trees under stress or growing outside their natural range are more prone to the disease. Cytospora canker rarely affects trees less than 15 to 20 years old. Infected trees are weakened substantially, but are rarely killed. 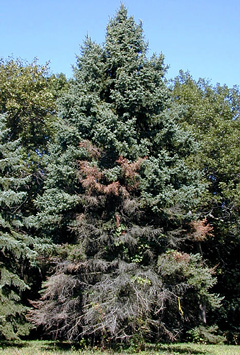 The disease normally starts on the lowest branches of the tree and, over a period of several years, progresses upward. At first, needles have a purplish hue, eventually turning brown and dropping, leaving dry, brittle twigs and branches.

On severely infected trees, the fungus will enter the trunk through wounds (usually where the branch meets the trunk of the tree), killing the cambium layer and leaving dead bark. This dead tissue is called a “canker.” A conspicuous white resin or “pitch” covers the cankered portion of the branch or trunk, sometimes flowing several feet down the trunk of the tree. This is an important means of diagnosing Cytospora canker; however, resin flow can also be associated with other tree injuries and is not exclusively symptomatic of Cytospora canker. Within the cankered area, black, pinhead-size fruiting structures (pycnidia) of the fungus can be seen with a microscope or hand lens and are a positive sign of the disease.

The fungus survives long-term as mycelium and spores in diseased stems. The canker grows slowly, eventually circling and killing a twig or branch. The fungal spores (conidia) are the principal means by which the disease spreads to other branches, entering through bark wounds and injuries. Infections occur in cool, wet weather. Spores are dispersed by splashing rain, wind, sprinklers, pruning tools, and possibly by movement of insects and birds. Canker development is most severe in trees under stress from drought, insect damage, crowding, nutrient imbalance, and mechanical damage to branches, trunks, or roots. Symptom development becomes more common one or two years following a severe summer drought.

Because Cytospora canker is a stress- induced disease, trees should be planted in sites that are favorable to their growth (e.g., avoiding places where they become too crowded). Minimize stress of established trees by taking care not to injure the root system or compacting the surrounding soil. Use a three-to-four-inch layer of organic mulch to retain moisture and reduce rapid soil temperature fluctuations. Water well in dry periods and provide adequate moisture in late fall before the ground freezes. Improving soil quality will reduce stress. Infected branches should be removed to improve appearance and reduce chances of further spread. Avoid pruning or working around trees when foliage, twigs, and branches are wet because water disperses the fungal spores. Clean tools thoroughly and disinfect with rubbing alcohol, a 10% bleach solution or comparable disinfectant after each cut when pruning out diseased wood.

Chemical control is not useful in controlling this disease.

Rhizosphaera needle cast is a common foliar disease of spruces and other conifers caused by the fungus Rhizosphaera kalkhoffii. Colorado blue spruce is particularly susceptible and can be severly damaged by this disease. Other hosts include white, black, Engelmann, Sitka, and Serbian spruce; Austrian, mugo, Eastern white, and Japanese red and black pine, as well as Douglas-fir and Siberian fir. Norway spruce is relatively resistant. 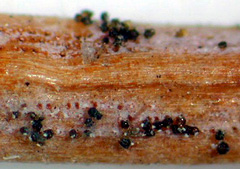 During late summer, this disease causes firstyear needles to appear mottled or speckled with dull yellow or reddish blotches. Later, (often the next year) infected needles on the interior of a branch turn purplish-brown (from the tips downward) and drop prematurely. Infection generally begins in spring on the needles of the lower branches soon after the needles have elongated. Symptoms spread upward and around the tree. Sometimes infection will start on branches in the middle of a tree, creating defoliation “holes” among healthy branches. Heavily infected trees can suffer severe needle loss and branches may die as they become defoliated. Trees are rarely killed by Rhizosphaera needle cast, but several years of attack will take its toll and only the current season needles may remain.

In moist conditions, the fungus inside older needles produces black fruiting structures (pycnidia) that appear as distinct rows of black, pinhead-size dots. These fruiting structures emerge through needle pores (stomata), either before or after the needles have dropped. This can be seen with a hand lens or by the unaided eye. Healthy stomata appear white. The rows of black stomata are a diagnostic feature of Rhizosphaera needle cast. This disease can be frustrating because severe defoliation can occur quite rapidly and without indication that the disease is even present.

As with most fungal diseases, infection occurs in warm, wet weather. The spores of Rhizosphaera needle cast are released from spring until fall; thus, working near trees in wet weather should be avoided throughout the growing season. For all trees showing symptoms, remove (when feasible) dead branches, fallen needles, and cones under the tree to prevent further infections. Prune surrounding plants to promote better air circulation and keep plants well watered, especially in periods of drought, to alleviate stress. Water all evergreens before winter to avoid root desiccation and winter injury.

Contact the Plant Clinic (630-719-2424 or plantclinic@mortonarb.org) for current recommendations.  Use pesticides safely and wisely; read and follow label directions.

The pesticide information presented in this publication is current with federal and state regulations. The user is responsible for determining that the intended use is consistent with the label of the product being used.

The information given here is for educational purposes only. Reference to commercial products or trade names is made with the understanding that no discrimination is intended and no endorsement made by The Morton Arboretum