The gypsy moth, Lymantria dispar, was introduced into this country in 1869 and has since become a serious pest in the northeastern part of the United States. In some areas it has changed the ecology of native forests, defoliating more than 13 million acres of woodlands in one season.

In recent years, the gypsy moth invasion has slowly moved westward, with established populations in Michigan, Wisconsin, Indiana and Illinois.

When populations are high, entire forests may be defoliated, but trees are rarely killed unless they are already in a weakened condition. However, consecutive years of defoliation make them more susceptible to insect and disease problems, and eventually death. Needled evergreens are at the greatest risk when defoliated because they cannot produce a second crop of needles and usually die. 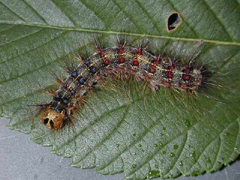 The gypsy moth goes through four stages of development — egg, larvae (caterpillar), pupa (cocoon), and moth. It has one generation a year. Eggs are laid in a single mass containing 100 to 1,000 eggs. The masses are about 1 1/2 inches long, and covered with velvety, buff or yellow colored hairs from the abdomen of the female moth. The gypsy moth overwinters as eggs, hatching from April to late May. The young, tiny larvae (caterpillars) spin a silken thread suspended from a leaf, where winds disperse the larvae several hundred feet, spreading the population.

Caterpillars typically feed in groups during the night, chewing small holes in leaves, and progress to feeding from the outer edge of the leaf toward the center. They rest on branches and trunks during the day, but when populations are dense, they feed continually day and night until the tree is stripped. They do not make or inhabit tents or webs.

The mature caterpillars are up to 2 1/2 inches long, brown, and hairy with five pairs of blue spots and six pairs of red spots along their back. About mid-June, the full-grown caterpillars stop feeding and find a sheltered place to pupate.

In early July, the adult male moth will emerge from the cocoon and begin searching for the females. The female moth also emerges from her cocoon, but is unable to fly.  The moths do not feed in the adult stage.

The male moth is brown with black markings and has a wing span of 1 1/2 inches. The female moth has a wing span of 2 to 2 1/2 inches and is white or cream-colored with black, wavy markings on the wings. Male moths are attracted to a sex pheromone that the female moths release. Once the eggs are fertilized, the female moth lays her egg mass under loose bark, in woodpiles, on outdoor furniture, or any other concealed location. Both moths die and the eggs do not hatch until the following spring.

The gypsy moth is attacked by a number of predators, parasites, and pathogens. The bacterial insecticide known as Btk (Bacillus thuringiensis var. kurstaki) is sprayed to kill gypsy moth caterpillars.  Pheromone flakes can be released to disrupt the mating of the gypsy moth.  A natural virus occurs in some areas and it can kill the caterpillar.  In 1990, a fungus that attacked gypsy moths in Europe was released and is showing potential for reducing large populations.  Overwintering eggs die when temperatures fall to -20ºF or lower for three consecutive days.  As government agencies continue to search for natural controls to assist with spray programs, eradication efforts have been successful in eliminating isolated infestations. With nearby states containing large numbers of gypsy moths, however, the potential spread of this insect is high in areas dominated by trees (i.e., parks, cemeteries, golf courses, forest preserves) and on property where trees are landscaped in a more natural setting.

WHAT TO DO IF YOU FIND GYPSY MOTHS 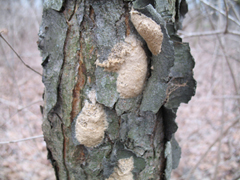 As an individual, if you have recently moved to Illinois or traveled in an infested area during the egg-laying period, examine your outdoor furniture, firewood, and vehicles (even the wheel wells), for pupae and egg masses. Scrape egg masses from their location with a putty knife, remove other life stages by hand, and dispose of them in a container of hot water, household bleach, ammonia, or kerosene.