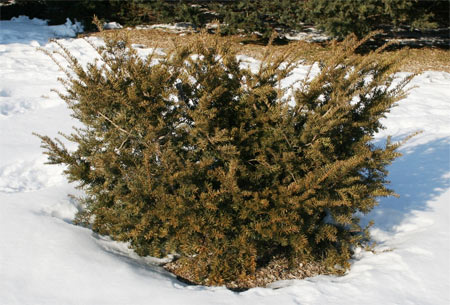 Yews (Taxus) are the dominant genus in the yew family (Taxaceae) section. Taxus species are small coniferous trees or shrubs, that have flat or lance-shaped needles, and highly modified seed cones called arils. The seed cones are red, look like berries, and are open at one end. The fleshy red part of the cone is actually a modified scale. Like juniper seeds, yew cones are also popular with birds, which consume the "berries" and later disperse the seeds via their droppings.