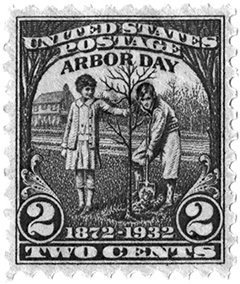 “Arbor Day is not like other holidays. Each of those reposes on the past, while Arbor Day proposes for the future.”

Arbor Day had its beginnings in an area not always associated with trees or forests—the Great Plains. J. Sterling Morton (1832-1902) and his wife Caroline Joy French moved in 1854 from Michigan to the newly formed Nebraska Territory, a land devoid of trees. He endeavored to encourage tree-planting to improve the environment and beautify the landscape to attract settlers to the area, which became a state in 1867. He carried out his work through a succession of literary, agricultural, and political positions and activities, initially as editor of Nebraska City News.

In 1872 on April 10, his idea to set aside a day for planting and calling attention to trees became the first Arbor Day, when it is said that Nebraskans planted one million trees. The birthplace of Arbor Day was Nebraska City, where the Mortons lived in their home called Arbor Lodge. In 1885, Nebraska declared J. Sterling Morton's birthday, April 22, as Arbor Day. Eventually, J. Sterling Morton served as U. S. Secretary of Agriculture under President Grover Cleveland from 1893 to 1897.

Today, all 50 states, as well as many countries around the world, recognize Arbor Day in some manner. The day of its observance varies, depending on the best time of year to plant trees in each locale. In Illinois, Arbor Day is the last Friday of April.

Learn more about how the Arborerum is celebrating Arbor Day this year.