Bur oak blight (BOB) is a leaf blight caused by the fungus Tubakia iowensis. It is a disease of concern to anyone who has bur oak trees on their property. BOB is most prevalent on Quercus macrocarpa var. oliviformis, an upland variety of bur oak characterized by its relatively small, olive-shaped acorns. Susceptibility of bur oaks to BOB is highly variable, and trees of all sizes are at risk. Occasionally, BOB can infect swamp white oak (Q. bicolor); it is unknown whether hybrids of bur oaks are susceptible. Repetitive defoliation of trees by BOB increases susceptibility to secondary problems such as the two-lined chestnut borer (Agrilus bilineatus) and Armillaria root rot, which ultimately cause tree decline and death.

Symptoms of BOB become visible during mid-July with the presence of small circular leaf spots displaying colors of reds, purples, and browns. Next, the major leaf veins start dying and display similar colors (Fig. 1).  Small, black fruiting bodies, which contain fungal spores become visible along the undersides of these veins. 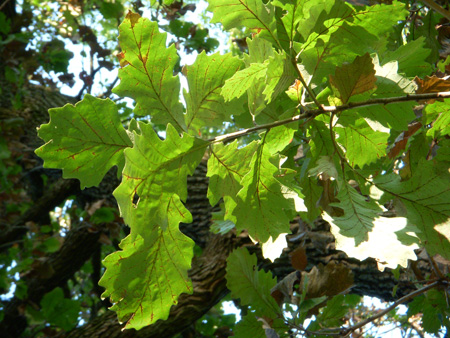 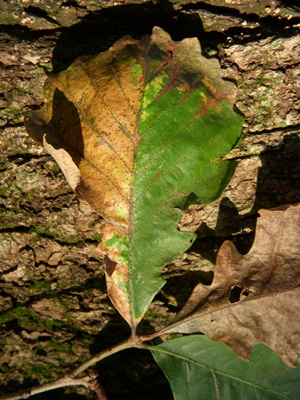 As the disease progresses, wedge-shaped chlorotic-dead areas (Fig. 2) of the leaf become prominent and the bases of the petioles die and turn brown. In late August to early September, the dying petioles turn entirely brown, become swollen at the base, and develop black pimple-like fruiting bodies on the surface that are visible with the naked eye (Fig. 3 and 4). The presence of these fruiting bodies on the petiole is essential to the confirmation of BOB.  Dead leaves and/or dead petioles will remain attached to the stems throughout the winter. 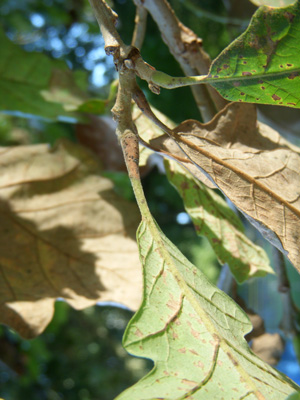 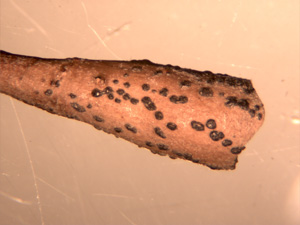 The disease starts in the lower, inner sections of the canopy and spreads upward and outward as it progresses.

Fruiting bodies on dead petioles from the previous season release spores during the spring and this is considered the primary infection. The spores are spread by splashing rain and infect the newly-emerged foliage. The intensity of the disease within a season is dependent on spring moisture. Although infection occurs in spring, leaves will appear healthy until mid-to-late July. The foliar symptoms progress throughout the month of August and early September. Secondary infections will occur throughout the season from spores developed under leaf veins during wet periods. Fruiting bodies are produced on dying petioles in late summer.  Entire leaves, or just petioles, will remain attached to the stems until the following spring and repeat the cycle.

Cultural – There are no promising cultural methods to manage BOB. Removing leaf litter under the tree will not reduce the infection rate the following year. Plucking off petioles is likely not an effective method because the fungus can survive within the stems and it is not practical on large trees.

Chemical control – A fungicide treatment in spring after full leaf expansion is the most effective method for managing BOB. Results from studies conducted at Iowa State University showed injections of propiconazole (Alamo formulation) reduced symptoms in the fall and in the following year. Repeat applications are not recommended until the infection becomes severe in later years. Fall applications of fungicides are not recommended for BOB.