Pinewood nematodes are carried from diseased trees to living trees in spring by pine sawyer beetles. When the beetle feeds on a healthy tree, the nematodes leave the beetle and enter the tree through the feeding wounds. Once the nematodes infest the resin canals of the pine, they multiply rapidly, clogging the water transport system of the tree. Without water, the tree dies. 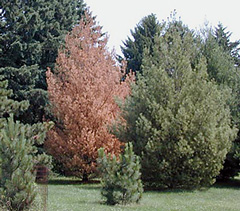 The needles are usually the first part of the trees to show symptoms. They appear as an off-color grayish-green, then turn yellow and reddishbrown. The tree dies rapidly after the needles turn color, usually within a few weeks or months. Most deaths occur in late summer or fall. A tree that declines slowly is usually not suffering from pine wilt.

A laboratory test to check for the presence of the nematode is necessary to confirm the diagnosis. Two branch sections that are each 8 inches long and 1 1/2-2 inches in diameter should be cut from the tree. The branches should be dead but still have brown needles on them. Mail the samples in a paper bag, not a plastic bag, with your name and address and a history of the problem to the University of Illinois Plant Clinic. There is a fee for each sample. Phone:  217-333-0519

Once a pine has started to die, it needs to be removed from the site immediately or burned where burning is still permitted. The wood should not be kept for firewood but can be chipped for use as mulch. Insecticide treatments to control the beetles that carry the nematodes are impractical because the beetle has a long period of activity. It is also very difficult to exterminate the nematode in infected wood. If the disease has been diagnosed and you wish to plant a tree in the same place, use resistant trees like Norway or blue spruce, Douglas-fir, cedar, or hemlock. 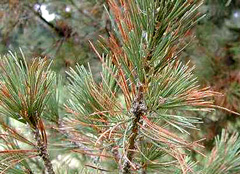 Yellow to tan spots enlarge to form dark reddish bands on the needles in the fall. The ends of the needles beyond the bands die, while the bases of the needles remain green. Small black spots may appear in the dead and discolored areas. Needles shed prematurely, especially second- year needles. Infection is usually worse in the lower half of the tree. Successive years of severe infection result in decreased growth and death.

Diagnosis can be confirmed by a laboratory. See the diagnosis section under pine wilt (above) for the directions.

Contact the Plant Clinic (630-719-2424 or plantclinic@mortonarb.org) for current fungicide recommendations.

Lophodermium is caused by the fungus Lophodermium seditiosum. The disease is spread from August through October by winds during rainy weather. Infection will not be noticed until the following spring.

In March and April, brown spots or bands with yellow haloes appear on the previous year’s needles. As the spots enlarge, the entire needle turns yellow and becomes brown by late spring. Defoliation is common on lower plant portions, often leaving only tufts of green current-season needles at the tips. In late summer, small, black, football-shaped fruiting bodies appear as conspicuous protrusions on dead needles (best viewed with a hand lens or magnifying glass). The bodies characteristically have a lengthwise slit down their centers. Current season’s growth will not show damage.

Diagnosis can be confirmed by a laboratory. See the diagnosis section under pine wilt (above) for directions.

Registered fungicides should be sprayed four times beginning in early July when new needles are fully grown.  Contact the Plant Clinic (630-719-2424 or plantclinic@mortonarb.org) for current recommendations.

Use pesticides safely and wisely; read and follow label directions.

The pesticide information presented in this publication is current with federal and state regulations. The user is responsible for determining that the intended use is consistent with the label of the product being used.

The information given here is for educational purposes only. Reference to commercial products or trade names is made with the understanding that no discrimination is intended and no endorsement made by The Morton Arboretum.